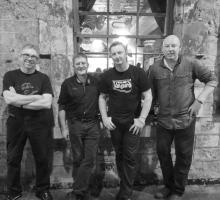 Muddy Road have been a feature of the Adelaide blues scene for several years, having four albums under their belt and playing regularly at leading blues venues like The Gov and the Semaphore Workers Club. Originally coming together to celebrate the energetic sounds of Chicago blues legends like Muddy Waters, Little Walter and Sonny Boy Williamson, they have broadened their sound to include contemporary bluesmen from New Orleans and Texas as well as their own original music. Either which way, it’s music that rocks!